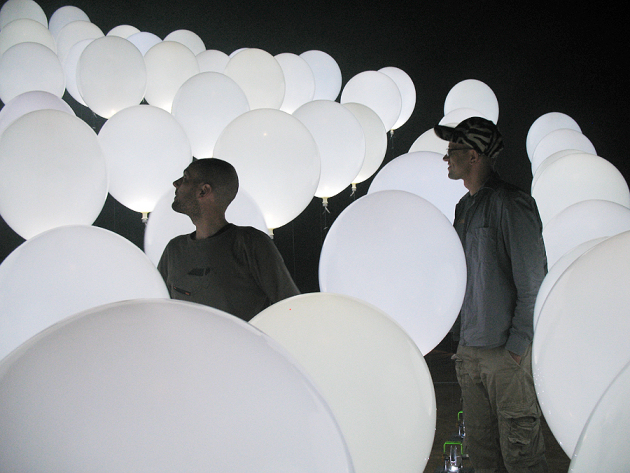 In 2008 a berlin-based producer, composer, sound engineer, and installation artist named robert henke wrote an essay entitled live performance in the age of supercomputing. it was a two-part piece that detailed the subtleties of live performance, and the different ways to move your audience. and henke should know. he has more than two decades of experience in the electronic music industry under his belt, not only as a producer and artist but likewise as the co-founder and developer of ableton.

his live performances — whether under his own name or as part of cutting-edge electronic act, monolake —  have brought him everywhere from the stages of mutek montreal or unsound poland, to the jagged rock cliffs of mexico or the empty airport hangars of france, to the dripping concrete walled nightclubs of his native germany. he works with anything and everything; lasers, kinetic light objects, field recordings, drum kits, helium balloons, computers, networking software. there is no limit to what henke can turn into music.

a few years after live performance in the age of supercomputing, henke rewrote the essay as a hitch hiker’s guide. the age of supercomputing, it seemed, had caught up with him. digital publication began calling for short, punctuated pieces; so henke obliged. written with a wink of irony, henke broke the essay down into accessible, easy to understand sections with titles like “play stuff the audience knows,” and “make sure it sounds great.” for our littlecity exclusive interview, i took a leaf from henke’s book: herewith you’ll find the hitch hiker’s guide to robert henke, an exploration of his work and values using the same sections as his pervasive essay.

in your hitchhiker’s guide to live performance, you wrote, “if what we deliver as performers shall be perceived as good, we first need to find out what that highly subjective notion of good could stand for.” what does “good” mean to you?

i’d like to do things that touch people on an emotional level. i can appreciate great conceptual pieces of art, but when it comes to my own works i want to achieve a mental state that is decoupled from a rational or technical perspective.

so, does the meaning of “good” change depending on whether you’re the listener or the performer?

when performing i am much more critical about details. as a listener i am way more forgiving, experiencing more at the overall picture and judging the work by that overall experience.

how does “fandom” benefit or hinder your live performances? is it harder to play for an audience that is completely new to your work?

quite the opposite! if there are no expectations there is a much more open minded starting point. if you do not know an artist there is no history, no context, no comparison. all that counts is the now. some of the most precious moments i’ve had with music, cinema, art, literature took place when being confronted with something i did not choose, and had no idea what to expect of it. i once played in madrid at a museum on a sunday afternoon, and after the concert and old lady came to me and talked to me very agitated in spanish. i was worried that she would complain about the horrible noises i made, but then someone started translating and it turned out the lady was totally amazed and wanted to know where to buy my music! (laughs)

expect the unexpected! does live performance have a recipe?

it depends very much on the specific type of performance. i have a different strategy for a monolake club set, a robert henke drone piece or the lumière project.

but does that idea of a strategy contradict the meaning of “live?”

in general, “live” implies to me that something special happens at a given moment together with the audience. coming back to the question about ‘good’ performance, this means for me that something has to happen during the performance which makes it a unique and remarkable experience. this can absolutely include such extremes as a perfect playback of a pre-recorded show under acoustic and technical conditions that exceed what i can experience at home, or a totally improvised anarchist wall of noise created by ten people with modular synthesizers or guitars.

in hitchhiker, you wrote that, “nothing can go wrong with playing stuff the audience knows.” do you still believe that?

(laughs) that was already ironic when i wrote it! i wrote that the best strategy is to play songs the audience knows, but in reality that only works if there is some add on value which creates the sensation of uniqueness and ideally of interaction between audience and performer.