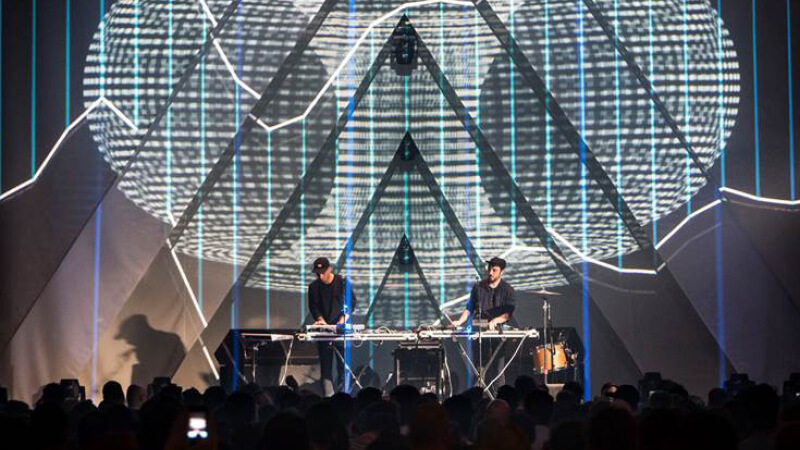 of the acts i was most excited to see, talaboman was the one i was least excited for, if that makes sense. maybe going in with mediocre expectations is the best advice, because talaboman truly blew me away. energy was already high at nitsa club as axel boman and john talabot followed up for magic mountain high, and the pair was an unstoppable hybrid. perfect chemistry, stellar track selection mixed with a resounding knowledge of what the crowd was hungry for. they dropped in numbers from their solo acts as well as pieces from their joint sideral release.

by contrast, birdsmakingmachine was the act i was by far the most excited for. it’s always a risk getting your hopes up that high — but rarely does an artist deliver quite as profoundly as diego “pior” martin. although birds is an artist collective, when playing live, it’s pior that takes the stage. his live at moog club on the wednesday was everything i hoped it would be: danceable, funked out, textural min tech that was somehow still in touch with pior’s argentinian roots. an unbelievable set that made up for the rowdiness of a young distracted crowd.

playing out for the start of the friday night at nitsa club, these two were the perfect warm up. though both artists are from berlin, they don’t play with the typical berlin personality; there’s no favouritism or purism here, every genre gets dealt a fair hand. their set moved from techno to bass with ease, pulling in references of house and groovy minimal. on point.

by the time the free show at the fabrica estrella damm rolled around on saturday, it’s safe to say i was tired. we had walked 45 minutes to get to the venue, but reykjavik 606 was bringing everyone back to life. although seemingly named for the city in iceland, this trio is from spain and brought it down like only a local act could: beats that told stories paired up with interesting, narrative-like visuals, all played out from behind a giant screen so that the show really did speak for itself.

woulg is a canadian artist, and a live audio/visual act who played out after reykjavik at estrella damm, treading somewhere between techno and broken down experimental. stripped back visuals in black and white were complemented by the greyness of his music; that’s not to say that it was dull, rather that it was impactful without having sharp edges. seamless transitions, interesting textures, and intricate infusions of energy that had me dancing despite my legs being made of concrete.

i debated for a minute on where to place these guys. “see” because their chemistry on stage was unrivalled at this festival? watching them was without a doubt a great pleasure, but “hear” won out because their sound was something else. not exactly what i’d expected based on my knowledge of move d; their set had a more visceral appeal, something entirely low-key or understated. their live felt perfectly spontaneous, filled in with guitar riffs and smokey atmosphere. an altogether excellent use of space and sound; a nod to the charming nature of their moniker.

you would think that living in a city where bread is like the number one thing that people love outside of techno would make me immune to the deliciousness of bakery smells, but… you know me. our walks through barcelona’s old town were a chorus of “mmmmm,” constantly interrupted with us stopping to press our faces against the windows of every patisserie, churro stand, bakery, and cafe.

something about the way that living in a city like berlin (or even montreal) gets you accustomed to the scent and taste of the urban landscape. it is truly an experience to walk five minutes from your apartment and arrive at port vell on the mediterranean sea, to smell this kind of organic environment: fresh air, salt water…

although the primary focus for mutek is the music, the fact that almost every act is accompanied by unparalleled visuals is a really crucial element to the festival’s success. although we saw our fair share of standard bright green linear laser light shows that looked like an electrocardiogram, we also saw some very innovative performances. case in point: twin drive, who played at the convent st agusti on friday. granted, i wasn’t particularly a fan of the duo’s sound, their take on visuals was just the right kind of weird. using nothing more than a slide projector, francesca banchelli presented plain washes of colour and old photographs manipulated by focusing/unfocusing the image, switching slides, and tangible efforts like her hair or hands in the shot. it was incredibly imaginative and lent a nostalgic lens to their performance.

when german a/v artist and engineer robert henke played mutek montreal, i reluctantly had to miss his set because of work. the insurmountable good things i heard about his set have haunted me ever since. we sat down at teatre barts to experience his show which, at over an hour long, could have been tedious, but was unsurprisingly fantastic. the relationship between visuals and music was undeniably precise: lights and lasers programmed to react to audio frequencies. the actual aesthetic of the lights was somehow full of personality, and there was often something quite witty about how the lights interacted with the sound — a flurry of pink lines would disappear to be replaced by a looming red square at the drop of a beat, or rings of purple light would fly from the center of the screen, bouncing off one another before hitting the floor.