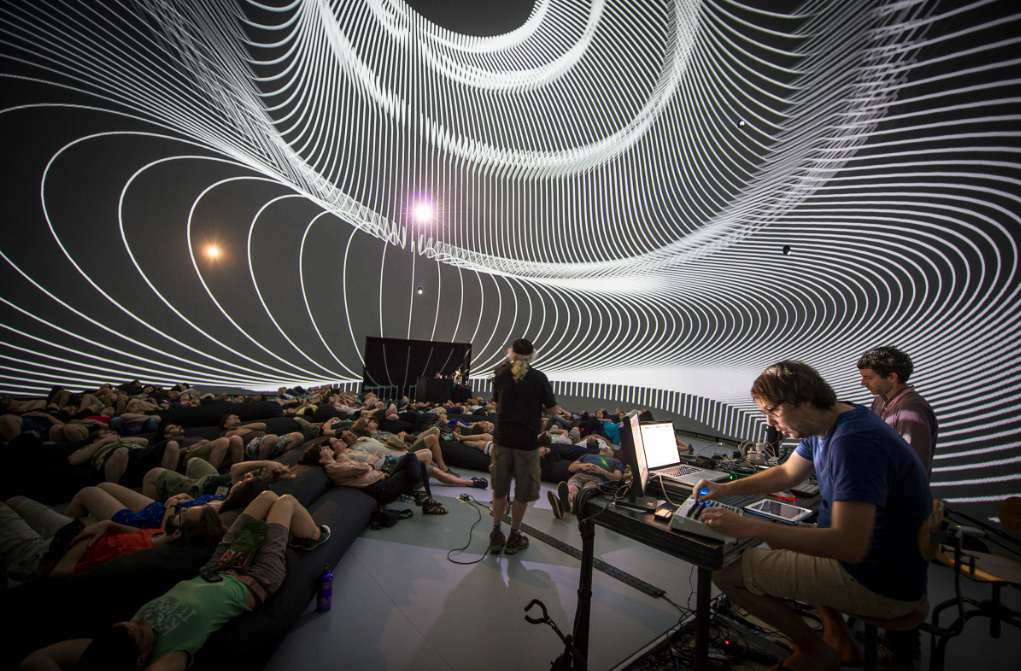 nonotak, a half french, half japanese duo, played at the institut francais in a basement theater, one of the festival’s smaller venues. their set up was unique in and of itself; they played inside a prism constructed out of a set of translucent screens held up by a triangle of poles. their live set was an arresting display of experimental and techno, but it was their visuals that stole the show. beams of white light projected from behind sent dynamic laser-like images to every side of the prism; minimalist and unique, just like their music.

look up! look wayyy up. arguably the most interesting part of travelling to a new city is taking in the incredible architecture. particularly when it’s as stunning as the array of architecture in barcelona. we saw everything from intricate gothic churches to modernist art nouveau from antoni gaudi. even mutek’s main hub, the convent st agusti, was a beautiful taste of catalonian history, having been constructed in the 1350s and repurposed today as a civic center.

nothing new there, but there is certainly something to be said about drinking a cafe con leche while wandering through the streets of barcelona in the sunshine, or sitting across from the half-built sagrada familia with a poorly rolled cigarette and an espresso. see also: the beneficial effects of coffee on your hangover when you wake up and have to be presentable for an interview in less than an hour.

no, we most certainly did not drink the best red wine available in spain. in fact, at one point, we bought a bottle from a sketchy, aggressive young man who was selling after hours beers in the middle of the street at 6 in the morning. the wine, however, was great. well, it was drinkable. or well, we drank it, i dunno.

after overcoming our hunger-anger pains and searching on the wrong street for a tapas restaurant that came highly recommended for 20 minutes, we settled on a little place with bad lighting and a good menu. we had everything from peppers padron and mussels to artisanal goat cheese and seafood salad and i am now considering moving to spain based on tapas alone.

this is by no means an uncommon feeling for me. it’s something known as le frisson; the goosebumps you get when some outside stimuli really makes you feel. maybe you’ve felt them at the touch of your lover, during a really good film, or at a sports game, but in fact, the most common way to experience a frisson is through music. it is a beautifully unsettling feeling, and for me, it happens not only when the music is that good but when the moment is that perfect. at mutek, it was standing on the top balcony looking down on an insatiable crowd during talaboman. their last 20 minutes was utter magic, and i get chills just thinking back on it.

i’m telling the truth when i say that berlin’s greys for days doesn’t bother me that much. it’s only when we get a sliver of sunshine in the very early morning that i even remember to miss the sun. i didn’t even bring sunnies when i went to krakow last month because i honestly forgot that the sun existed. not so in barcelona. despite torrential downpours on the first day, we had beautiful weather the rest of the trip and the feeling of sunshine on my skin was a welcome antidote to the berlin grey skies, and a wink at the upcoming summer.

where would a music festival be without bass? although many of the clubs had decent soundsystems, it was, perhaps surprisingly, the audio at teatre barts that threw down the most moving sound. during performances from maotik and metametrik, herman kolgen, and robert henke, the thunder of the bass and the quiver of the highs was so dazzlingly present that you vibrated in your seat. and for the rest of the night.