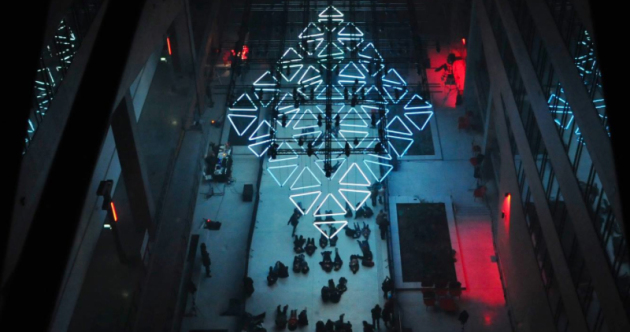 i spoke with a friend recently who made a point about the perfect live act being different enough from the artist’s album that it remains interesting, but similar enough that it feels familiar. how do you strike that balance in your live shows?

i always run in a circle, starting with the attempt to reproduce existing tracks and then during the evolution of my sets, move away from that into more improvised structures. seems to be a natural process for me; the more familiar i get with my own material the more i have the confidence to question the existing structures and come up with new way to arrange the same basic building blocks. my best live performances usually happen when i am already almost bored by my own material. then there is that flow of confidence from which i can depart at any time into more radical territory.

in hitchhiker, you make a similar point about exceeding expectations. is the threat of underperforming a motivator for you, creatively — as in, do you still feel like you have something to prove?

i am very often ridiculously insecure about my work, and as much as i dislike this notion of myself, it definitely forces me to move on constantly to get better. it only works on a long run because there are moments in between where i am surprised by the quality of what i can achieve, too. without the positive feedback i would not find the energy to do anything.

are the expectations you set for yourself sometimes more important than the ones set by your listeners?

yes. it also depends on who exactly states expectations and for what reason. at the end of the day, it matters that i do what i feel is the right thing, and not what a promoter or journalist or drunken raver asks for. however, input from friends or people whose intelligence and artistic integrity impresses me is valuable and might have an influence on what i do.

in this conversation that i mentioned, the topic of legacy came up; the idea that a popular pioneering artist’s legacy as world-changing or life-altering often makes it so that he can’t live up to that standard. would you agree? as an artist, does that worry you?

that question is as old as art itself! of course it bothers every single creative person. the topic would be worth a whole book in itself! the best strategy to cope with this is to understand that creating something that has meaning beyond the time of creation is an extraordinary gift and nothing to take for granted. thus, instead of being frustrated about not delivering a revolution with every single song, one should be happy about the previous achievement and simply do what one likes to do most.

the biggest danger comes here again from trying too hard to fulfill expectations. the reason for my own initial success very often was the complete ignorance of expectations: “yeah, i know what i am doing is not music, but i like it!” oh, twenty years later every former rock ‘n roll guitar player is including elements of that stuff in their music — great! that’s the state of mind i’d like to suggest for dealing with such questions. only from such a perspective is there a chance to achieve something unique. and this is reflected back in so many artists’ careers: initial success, period of less successful attempts to keep up with the expectations, doing something more personal again and often enough becoming recognized for that, too. and sometimes only post-mortem, unfortunately.

should every show be different, or is that a sign of inconsistency? where do we draw the line?

every show is different even if you play back a tape! every show should be an attempt to make it as good as possible, that’s what counts. inconsistency, on the other hand, doesn’t worry me. after all, if what i do as an artist is personal, what ever i do will shine through. i think for me the keyword would be integrity.

does that change depending on whether you’re the performer or the listener?

no. do i feel as an audience member, that someone tried the best to give me an experience, or is it all done lukewarm? if i get the impression that no one cared about essential details of a performance, i feel betrayed. but what these details are can be so different from situation to situation. if i go to a basement club listening to a hardcore noise act, that essential detail can be as simple as the deliberate absence of soft drink company branded fridges in the bar.

what’s been the most unexpected surprise you’ve encountered during a live performance, whether your own or someone else’s?

too many to count, but one which will stick forever did happen during the very first monolake live set in the mid 1990s. we played at a small club in berlin, with our equipment set up right at the bar. gerhard behles was operating a synthesizer, completely focused, and i was working with some other gear. suddenly a person approaches gerhard, requesting two beers. gerhard, who used to work in a bar himself, completely on autopilot just turned back, opened the fridge, grabbed the beers and handed them over to the guy, then continued playing! one day i want to see this as a movie scene…

that’s hilarious. with live performance i’m sure there are a lot of surprises like those, but how does this rule work with things like sound installations?

very often a substitute for time in music is space in installation art. you come to a museum and get one angle on a work, then you continue walking around and perceive the same work from a different perspective and it changes the experience completely. that’s one of the things i love about installations, that the the visitor can create their own compositions by simply walking around with their eyes and ears open.

as someone who has been involved in dance music for so long, do you find that you’ve become completely jaded or is it still possible for you to be surprised or blown-away?

it takes more to surprise me, but it still happens and that will never change. there are just too many people out there doing amazing stuff!

do you believe in humour in electronic music? i found that your lumière II show had a lot of lighthearted or playful moments in terms of how the visuals and lasers interacted.

i have been told i am a humorous person, so i guess it is important for me. the most serious people i know are also the ones who usually have a good sense of humor. how could i make something that is not at times lighthearted? it would not make me happy! after all, and despite the technical effort, at the end it is just sound waves and lasers with no other purpose than entertaining my audience. a lumière show does not change the world: it does not help fight poverty, it does not have a political message. however, if it can make people happy, there is a chance that those people go out of it, with more energy to fight what ever they need to fight for. and suddenly it becomes essential again.

how does space affect sound? does our understanding of music change depending on where we hear it?

it totally does. the separation of music and space is artificial and only a development since the invention of storage media. thousands of years before that music always did happen is specific spaces that suited the purpose. churches, living rooms, theatres, ritual spaces, outdoors, etc. a proper techno event has to happen in an environment that is rough and reverberant, not in a classical concert hall with a seated audience. and a morton feldman piano piece is not the ideal music for a beach bar.

what about for sound installations? how would, for example, your studies for thunderinstallation change if the audience was (hypothetically) in a cloud instead of sitting on rocks in mexico?

(laughs) i would love to perform in a cloud! i usually try to get as much information about a performance space beforehand and then decide based on this knowledge how to perform best. the mexico scenario is a good example, though. i was scheduled to play a monolake set there. but when i arrived i decided that i have a far more exciting offer to make than just a club set, and with the help of the super nice PA person, nicolas klau, we managed to set up a surround sound system in a few hours before the show. that effort totally paid off for everyone. one of the most remarkable shows i’ve had in the last 25 years.

is space something you consider when you’re building or creating a track, or is it only relevant when you’re playing live?

it depends. some of my works are created with specific types of concert situations in mind, and when ever i make a monolake track i envision how it would feel like to listen to it at a space like berghain.